Wedding confetti cannons make the BEST grand exits! Read all about confetti poppers and cannons below + subscribe now for the latest! 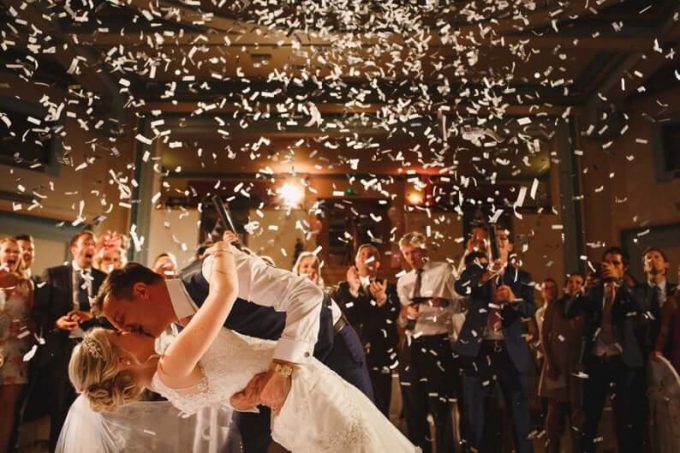 Are you looking for confetti cannons for weddings, particularly grand exits or fun on the dance floor? Do you want to know the difference between confetti toss bags, tubes, poppers, and cannons? We’ll tell you! But first, let’s chat… do you know what’s incredibly fun? Confetti. And it’s 100x even more fun when it is wedding confetti in a large bulk quantity, colorful, very festive, and celebratory. But do you know what’s not fun? Clean-up! :) I mean, Andrew and I bought these GIANT confetti poppers this year for New Year’s Eve, the kids loved them, we loved them, and I’m STILL finding a few confetti pieces in the strangest places! Confetti does not quit, it gets everywhere!

Before you buy confetti cannons for weddings and prepare to unleash ALL THE CONFETTI you’ve ever seen, make sure you’ve ticked the following:

a) selected biodegradable confetti (everything shown in this post is… boom!),

b) you’ve asked/begged someone/paid your sibling’s friend to pick it up afterward, and

c) your venue doesn’t prohibit wedding confetti, provided you will clean it up afterward

Check, check, and check? Good. Now you can do whatever you want with your confetti! And by the way, if you’re having a backyard wedding, you can confetti toss to your heart’s content. :)

Most wedding venues do NOT mind confetti cannons, poppers, or tossing packets, but it’s always a good idea to err on the side of caution, just in case.

As we mentioned, if you’re tossing these confetti poppers outdoors, here’s some great news: they’re environmentally-friendly. These confetti cannons, tossing packets, tubes, and poppers / confetti push pops are biodegradable and are made from rice paper, so they’re water-soluble and break down naturally. In this post, we’ll explore everything you need to know about wedding confetti: what’s the difference between wedding confetti cannons, poppers, and toss bags? Where can you buy the best confetti cannons for weddings? And what are some other options for tossing things at weddings that are also biodegradable? Let’s get started, you’ve got a grand exit to plan! :) Enjoy!

Confetti poppers are small, hand-held confetti shooters that guests can use individually. It’s sort of like this, in terms of effect:

They’re effective: guests take a confetti toss bag, open it up, and throw it at you while you exit the wedding. Use lavender tubes or toss cones or bags, like these spotted at Mavora Art and Design. 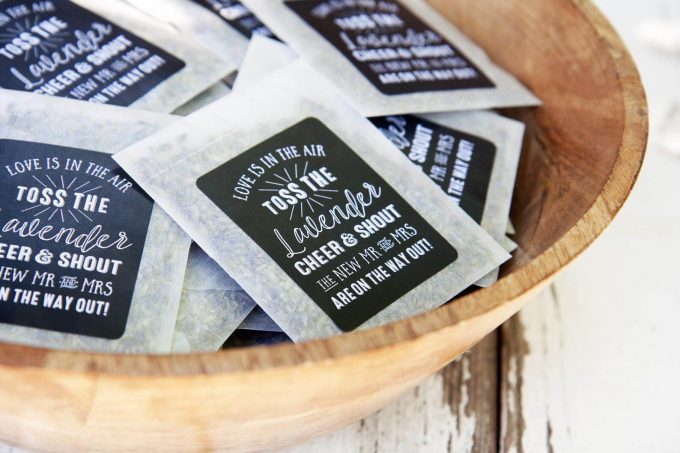 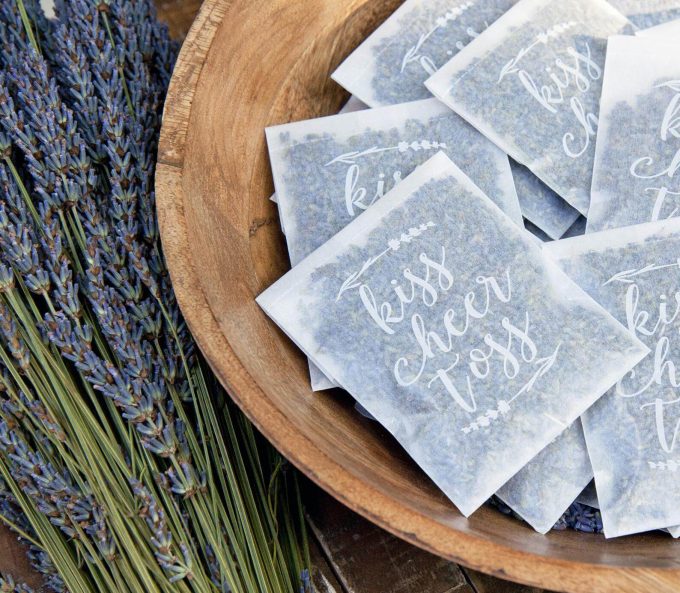 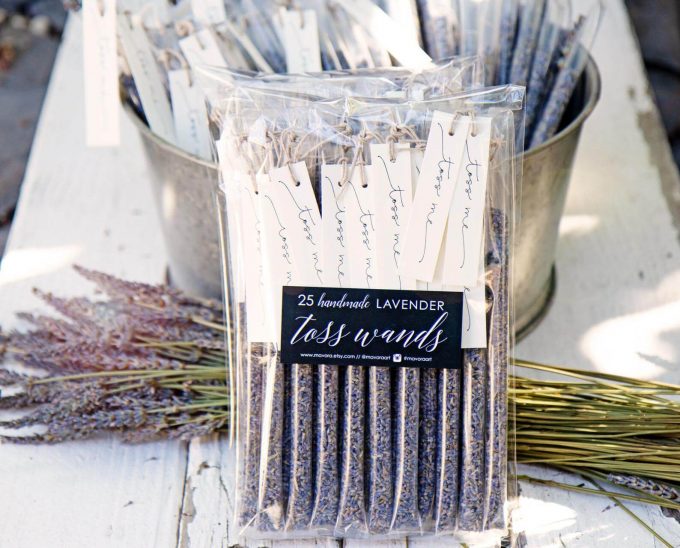 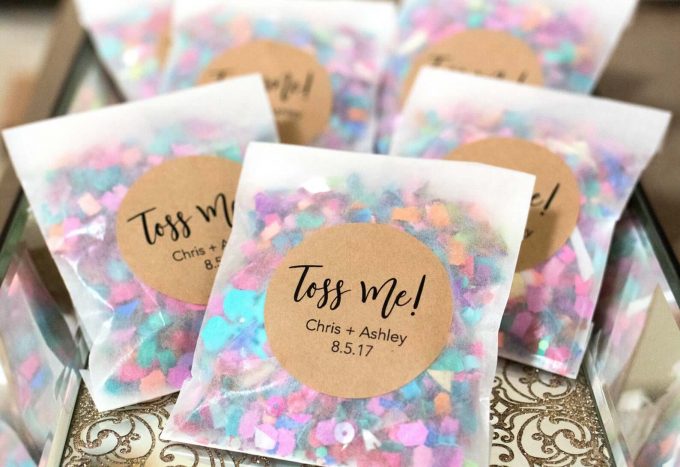 Cons: Timing can be tough: guests have to toss confetti at just the right moment. The confetti doesn’t go very far in the air and your photos may not capture the confetti shot as well.

Confetti poppers are weddings are fun: guests push on the bottom to release the confetti into the air.

Pros: Poppers — aka confetti push pops — are easy to use for guests of all ages. There is literally no set-up or prep time with toss packs, bags, or cones. Just aim in the air and push! Great for medium-sized weddings.

Cons: The confetti reaches higher in the air, due to the force of the confetti, but still not as long as cannons do.

These personalized wedding confetti poppers are made with dried petals and smell fragrant, plus they’re completely biodegrdable! By ConfettiConeCompany. 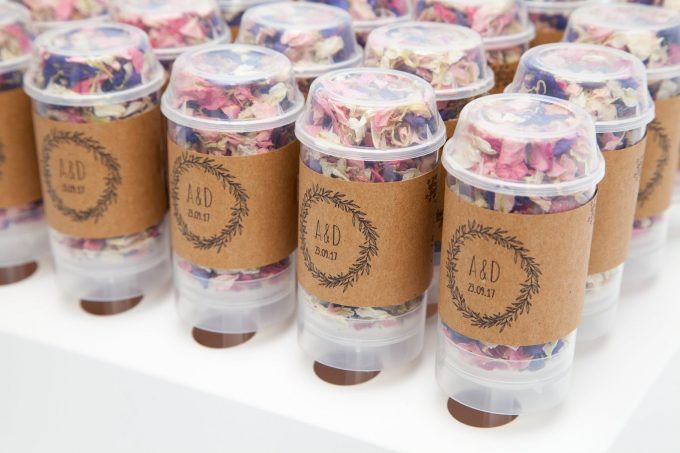 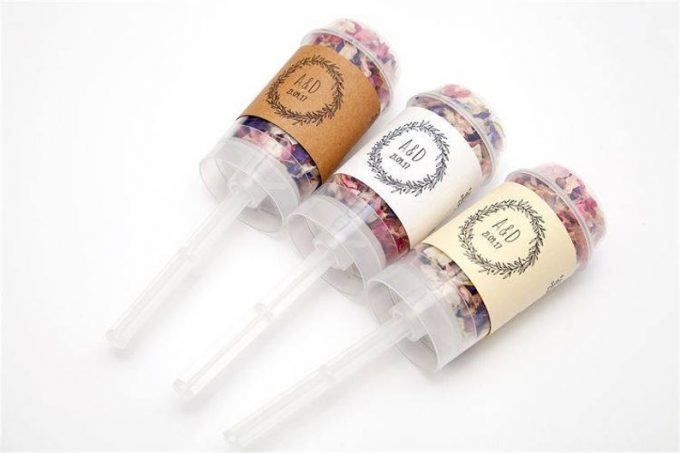 If you’re looking for confetti poppers for bachelorette parties or be my bridesmaid parties, check out these by WhiteConfettiBox. So fun! 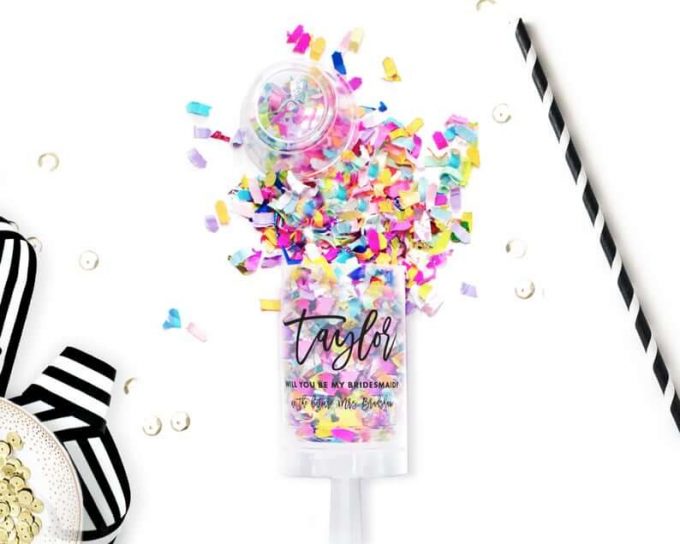 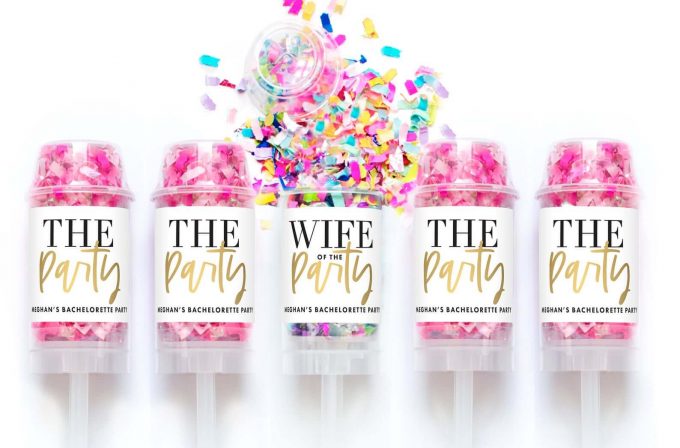 Or these “Love Is In The Air” confetti push pops by BubbleandBerry. Cute! 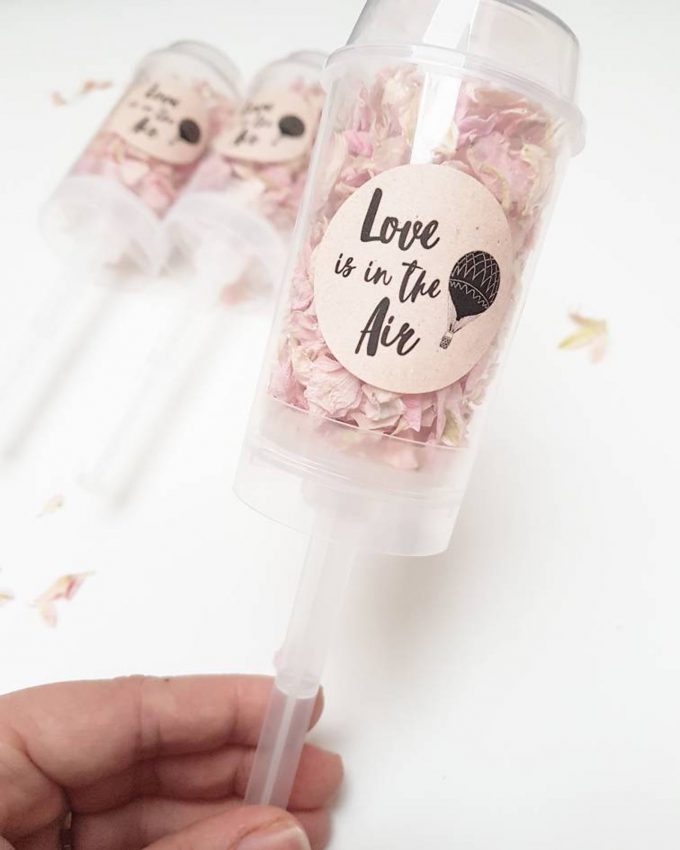 If you want to buy wedding confetti poppers in bulk, try here or ask individual shops for bulk pricing (you’ll save money when buying 50+ poppers for guests to use!)

With confetti cannons, festive paper bits are shot into the air, very high up, with tons of little bits of confetti raining down for the perfect photo. These are the best confetti cannons we found and they are by Shower & Co. Gifts. To buy wedding confetti cannons in bulk, just ask for a large quantity. Typically, you can save money when you buy bulk confetti cannon vs. a few small orders. Plus, you’ll save on shipping costs. 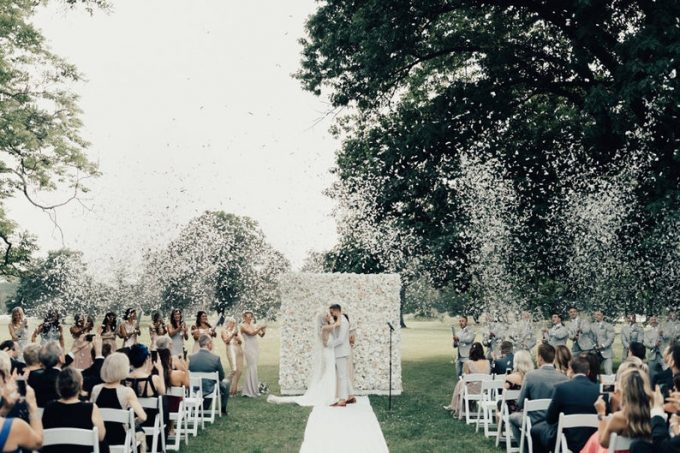 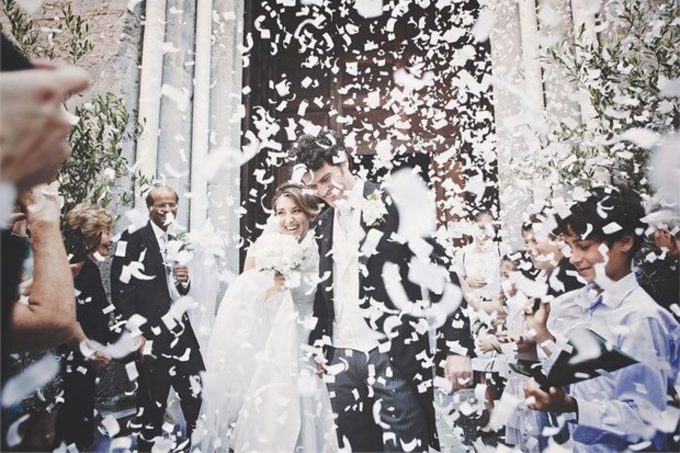 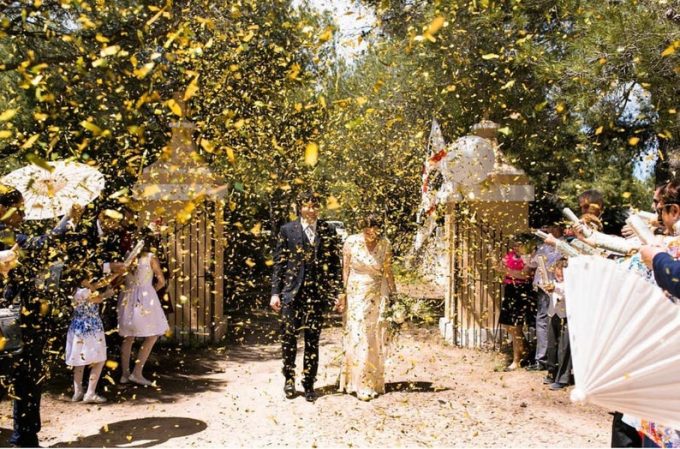 
But holy cow, check out these gorgeous wedding confetti shots you get as a result! 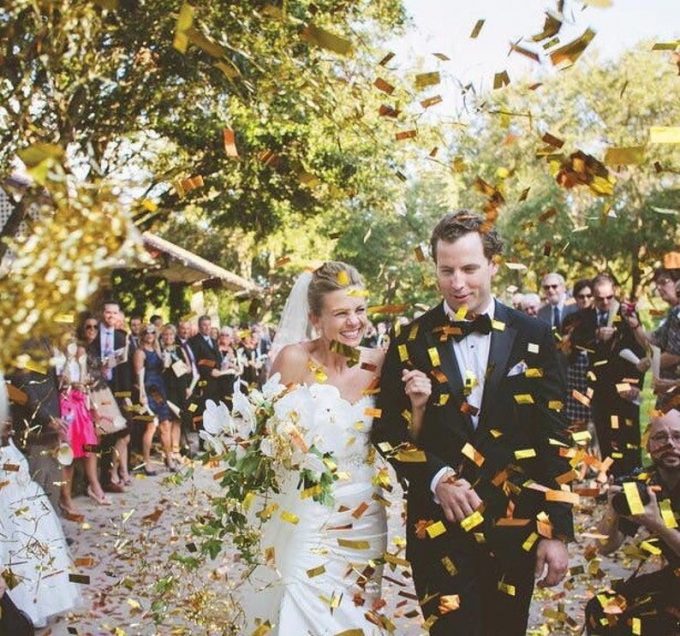 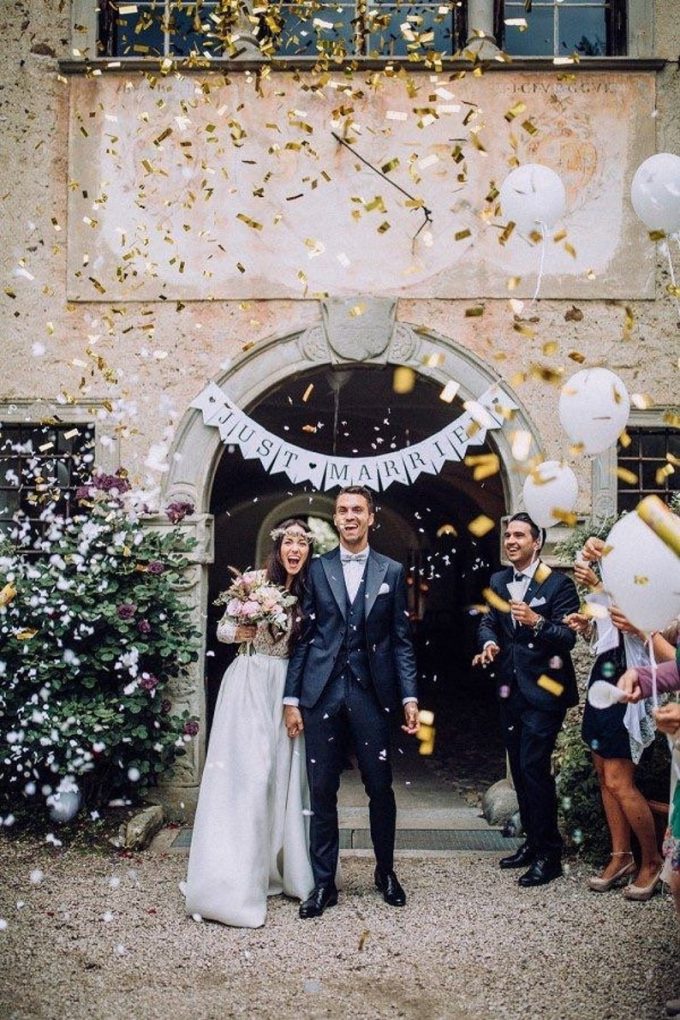 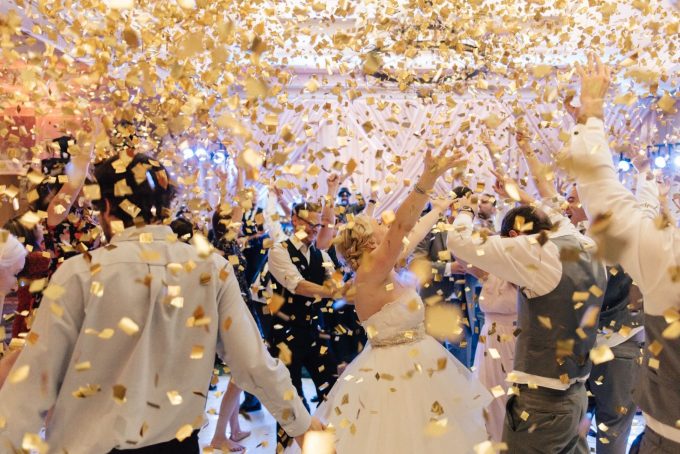 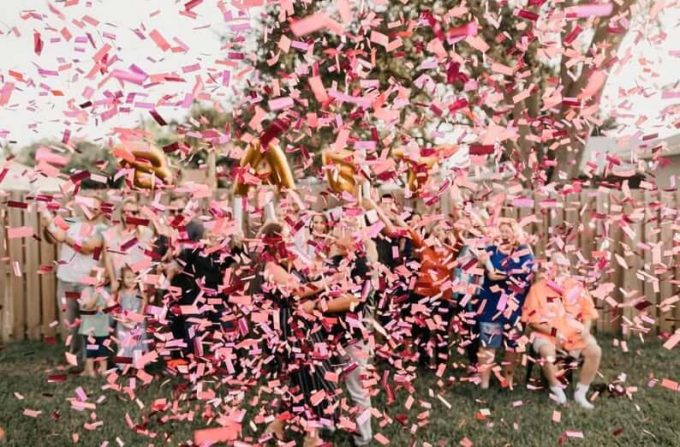 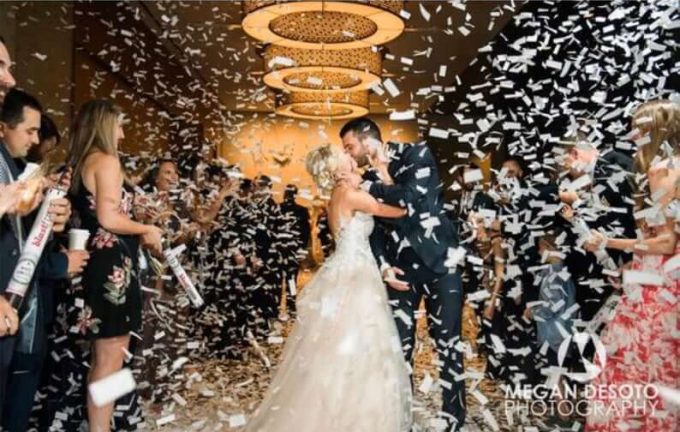 Here is what the wedding confetti cannons look like: 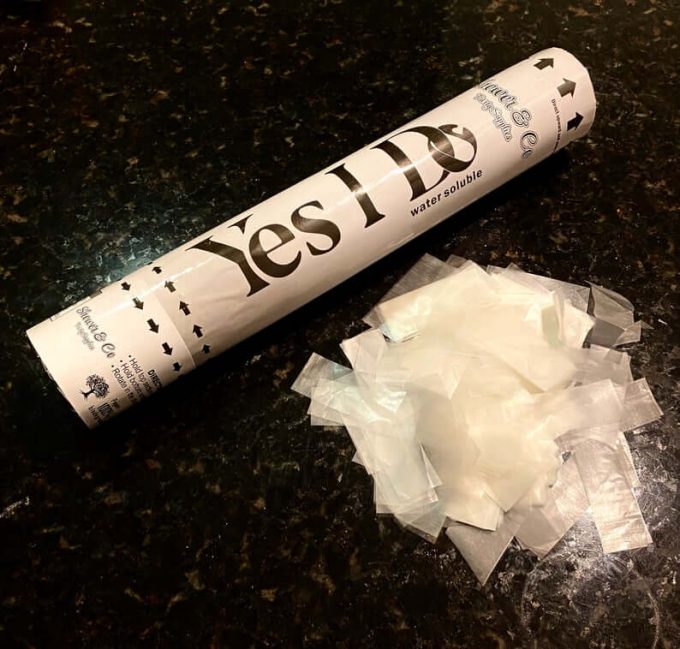 And since I was wondering… are wedding confetti cannons loud? Apparently, there’s just a POP when they’re released, but it’s no louder than a balloon pop according to reviews.

Based on these pros and cons, I’m a big fan of the confetti cannons for weddings, even though I do love all the tossing options. I really adore wedding grand exits, as you probably already guessed by now.

Which one would YOU toss at your wedding? Are you going with the wedding confetti cannons, or sticking to something simpler like lavender toss packets? Either way, you can’t go wrong. Grand exits at weddings are memorable and fun: they make for beautiful photos and guests will always remember the moment you exited the ceremony officially married!

Where to Buy Confetti Cannons in Bulk

Here’s where to buy confetti cannons, tossing bags, and/or confetti poppers in bulk for weddings or parties.

Which confetti type do you like the best? Old school toss bags? Modern poppers? Fun + crazy confetti cannons? Tell us in the comment box below!

P.S. Do you have questions about planning your confetti toss? Ask us in the comment box below and we’ll swoop in to help! Or email us directly at info[at]emmalinebride.com

9 Best Places to Shop for a Birdcage Veil

9 Best Bridesmaid Socks to Wear While Getting Ready...

9 Places to Buy Cheap Save the Dates

Where to Buy Wedding Bubbles in Bulk

Here’s EXACTLY Where to Buy Wine in Bulk for...